Yoga turned my body into a place I could call home 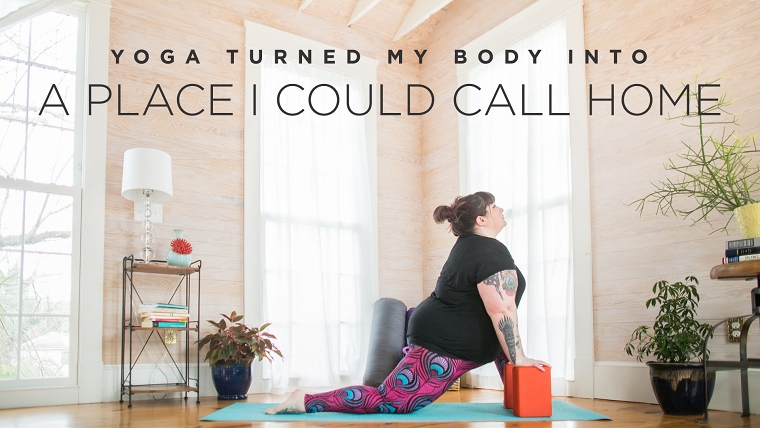 I’ll just come out and say it: I have a belly. I have thighs.

I have a big, round, plus-size, fat (you can pick the word you like) body.

And I practice yoga.

In many yoga poses, I am confronted by the reality of my body. My belly meets my thighs quickly in a forward fold. In shoulderstand, my belly is literally in my face, saying hello. In an inversion, my breasts are in my face. When I twist, my breathing feels constricted because my diaphragm is getting smushed.

While in these poses, I become very aware of my body shape as stuff squishes into other stuff. I’m literally running into myself.

When I began practicing yoga, the teachers didn’t know what the heck to do with me. Even though my body wasn’t making many of the shapes that they were asking of it, in most of the classes I went to, I was ignored. There were no modifications offered. Sometimes they’d say, “Use a block if you need one,” with no instruction on what to do with the block.

Surely the teachers could see that I couldn’t do some of what they were asking? And yet, I was ignored.

I’ve heard the same thing from many of my bigger-bodied students and friends. They get ignored in class. I don’t think this is malicious most of the time. I know for a fact that most new yoga teachers don’t get the information they need in teacher training to know how to work with raw beginners or folks in diverse bodies. It’s the reason Dianne Bondy and I created our Yoga For All online teacher training—we like to say that it’s the module that’s missing from most YTTs. 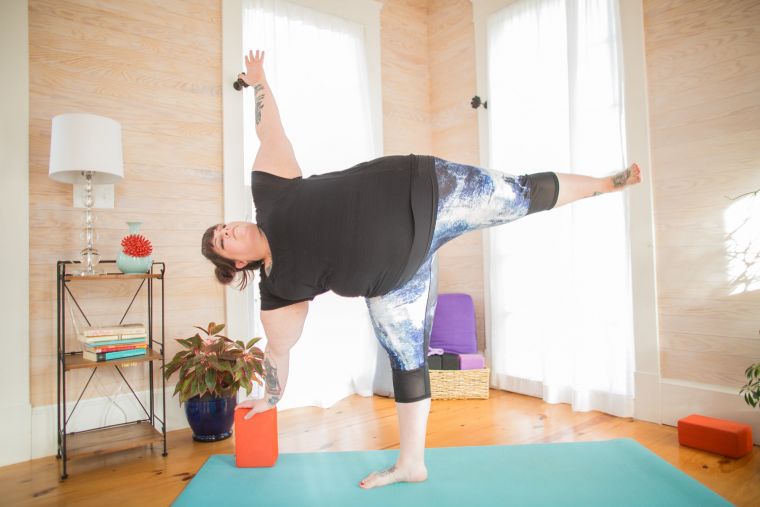 I know that, as a teacher, when someone walks in with a body you don’t understand—it’s scary. You want to help them, but you don’t know how. Maybe you don’t get what’s happening in their body (Why can’t they step their foot forward from downward dog into a lunge?), or you’re concerned that they might get injured in your class. It’s still scary when it happens to me as a teacher, and I am well versed in working with diverse bodies by now! So I don’t really blame past teachers for ignoring me.

Looking back now, being ignored for a few years of my practice was a gift, because it meant that I had to be creative and have agency when it came to my practice. Back then, there weren’t online videos telling you how to modify poses. There weren’t blogs or podcasts about diversity in yoga. There weren’t yogis who looked like me with hundreds of thousands of followers on Instagram. And in class, no one was telling me why I couldn’t step my foot forward between my hands to get from down dog into a lunge or how to get there in a different way, so I had to figure it out myself.

I won’t say that my practice was always pretty, but I will say that it was mine.

As I ran into myself during all these classes, I had to be creative about how to approximate the shapes that the other students were making, and I started moving my stuff out of the way.

I discovered one day that if I put my hands on my body and physically moved my belly out of the way of my thigh, I could sink deeper into a lunge. I figured out that if I shoved my breast underneath my arm I could reach across my body in a seated twist. I realized that if I tucked my belly up and back toward my pelvis in a forward fold, not only could I move deeper into the pose, I now instinctively understood what the teacher meant by “hinge at the hips.”

I learned different ways to transition in sun salutations. I knew that if I was asked to walk my feet to the front of the mat, I would have to instead walk my hands back to meet my feet, finish the sequence, and then just step to the front of the mat to join the rest of the class. I learned that instead of stepping my foot between my hands, I needed to step my foot wide of both hands to give my body more room.

I got to know my body. 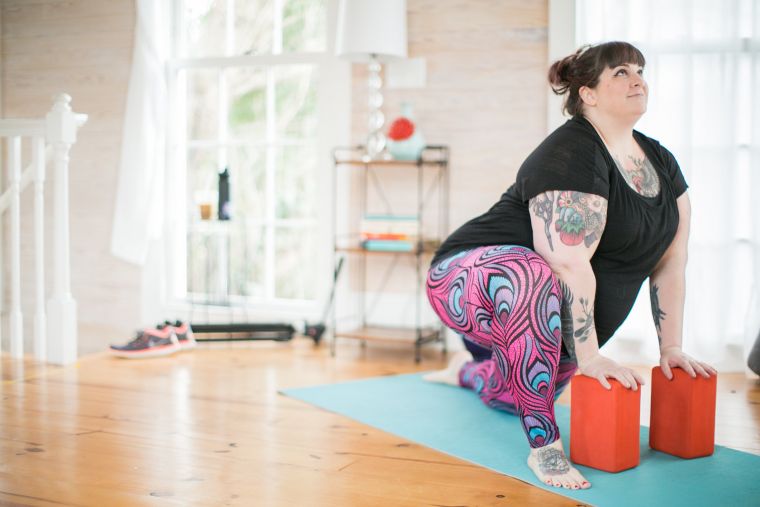 I became comfortable touching and moving my flesh—my skin, fat, fascia, muscles, and the bones underneath.

I became more physically fluent in my body. And that changed everything.

When your body is the opposite of what society says is worthy or good, it can be painful, disorienting, and difficult to spend too much time really inhabiting your (imperfect, human) body. Mindful movement made me more physically certain of myself.

My yoga practice made me sure—made me know in my bones—that my body was a powerful, good, and safe place to be.

I remember going to my first yoga class in my early 20s. I was on some big weight loss project, and the trainer at my gym said that I should do yoga on my rest days because “Yoga doesn’t really count as exercise, but you still burn calories.” Well, sign me up. I was pretty sure fat people didn’t go to yoga studios, but I’ve never been shy to take up space in fitness environments, so I went. Sure enough I was the only fat person in the room, but I rolled out my mat anyhow and joined the class.

I don’t remember what we did in class. What I do remember was leaving the class, walking to my car behind the building, driving away, getting on the interstate to go home, and about 10 minutes into my drive, the familiar mental soundtrack started back up. Maybe you’ve experienced this soundtrack too: that voice in the back of your mind that second-guesses everything you do, tells you you aren’t good enough, reminds you of that stupid thing you said or did, and constantly judges and casts shame onto your body.

What I realized was that if the ol’ judgment reel had started back up, that meant it had stopped. Even for a few minutes, my mind had quieted itself and I had spent those minutes not thinking about or judging my body or myself. This was new! I was eager to repeat this experiment, so I went back to class. A few classes more, and I was hooked. 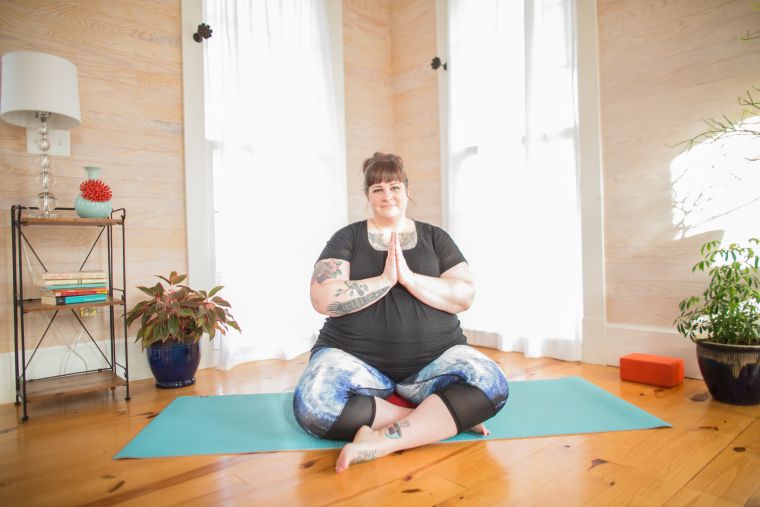 I decided to take yoga teacher training about seven years into my practice—not to become a teacher, but to deepen my personal practice and learn “the rest of yoga” outside just the poses. I really had no plans to teach. But over the several months of the program, I became determined to teach.

I had a series of realizations during teacher training that inspired that decision. First, in “asana lab,” it became apparent to me that I was having a distinctly different experience than the other teachers in the program. Being the only person not in a thin, young, bendy body was actually a gift in this case because when it came time for teaching to the rest of the class and, later, for feedback, I was able to share how I experienced the poses in my body.

Then, it occurred to me that if I’d had the experience in yoga classes of being ignored and left to fend for myself for years, then other people were having that experience too. It also occurred to me that I am loud, ostentatious, perhaps a little brave, and not afraid to take up space. So, regardless of being ignored, I had kept coming to class, determined to figure out my own version of yoga. But I realized other people might not do that. In fact, most wouldn’t.

Indeed, now I have many students who had a bad first experience in yoga and never went back until they found me (someone who looks like them and understands their bodies). When they were ignored in class, they didn’t assume the teacher didn’t know how to work with them. They just saw a class full of people doing what the teacher asked while they got no acknowledgement that they were having a different experience. They felt uncomfortable, maybe they injured themselves, but in any case they definitely left the class “knowing for a fact” that their body was wrong for yoga. Everyone else could do the poses as the teacher demonstrated them, but they couldn’t, so their body was wrong.

Back in teacher training, I knew that this had to be a widespread experience and that I needed to work on changing that. Yoga had returned my body to me and proved that, instead of struggling against its size or shape, I could be allies with my body. I needed to share this realization with others like me. I had discovered that I had a passion for teaching yoga to the “yoga misfits”—folks with big bodies, injuries, creaky joints—and the raw beginners, too.

Most of all, I wanted to share with others the amazing gift that yoga has given me: turning my body into a place that I can call home.

This article was originally posted at Yoga International.