There’s not “a thin person inside you, trying to get out” and that’s a good thing 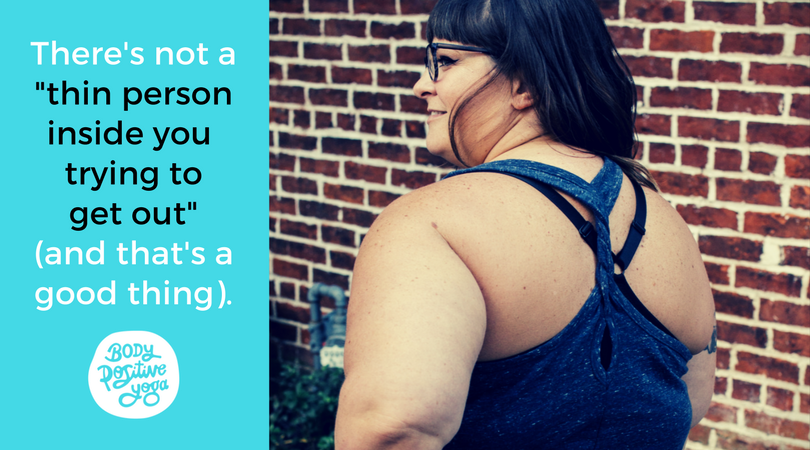 Oftentimes when I present the message of self-acceptance, body peace, and Health At Every Size®, I get some angry reactions from folks who are pursuing intentional weight loss.

Presented with the evidence that diets fail more than 95% of the time and that behaviors are a consistently better determinant of health than weight, the response is often something like, “Well if diets don’t work then you’re saying I should just quit altogether?! Don’t take my hope away!”

In my opinion, “you can be okay with your body instead of hating it” and “you can significantly improve your health even if your weight doesn’t change” and “you never have to diet again because dieting SUCKS” are by definition hopeful messages, but there are definitely people who learn this information and hear, “you’re doomed to life as a pathetic and undesirable fatty who will never be loved or found desirable.”

I get it. Most of us have spent years curating an image and fantasizing about it: what will life be like when we finally become thin.

Magical thinking: the fantasy of being thin

There’s all this magical thinking around being thin. No one thinks things like, “when I’m thin I’ll look good in clothes!” No. The promise is that when we’re thin we’ll be a completely different person.

Each of us has a fantasy of what thin-life will mean. Here are a few that I’ve read that resonated and perfectly illustrate the magical thinking that occurs:

“I fell for the great American dream, female version, hook, line, and sinker. I, as many young women do, honest-to-God believed that once I Just Lost a Few Pounds, suddenly I would be a New You, I would have Ken-doll men chasing my thin legs down with bouquets of flowers on the street, I would become rich and famous and glamorous and lose my freckles and become blond and five foot ten.”

Mara Glatzel, from Grieving the loss of your body fantasy,

“The body that I imagined myself in was effortlessly thin. She was so gorgeous, and her skin was always clear. She wore clothing like they were gracing her with their presence, as though they had just fallen onto her body looking that perfect and pulled together. It wasn’t just her body either, she was seriously cool. She had tattoos that delicately dressed up her perfectly pigmented skin, and hair that people would just die for. She was smart. She was eloquent. She was unbelievably charismatic.  She was effortlessly successful in every endeavor that she dipped her little toe in, because her smile was enough to make you pull out your wallet.”

Kate Harding in The fantasy of being thin,

For me it looked like a tall, rich woman who never had to worry about money. A house that looked more like a museum than a home, and heels that clicked on marble floors. Pencil skirts and a cool New York job maybe as a lawyer or something that brought men to their knees. Big salads that I mostly wouldn’t eat. Aloof.

I’m none of those things. I don’t like wearing heels or pencil skirts. I feel itchy and crowded in New York City and I have no interest in being a lawyer. My home is cozy and cool and filled with midcentury antiques and thrift store finds. Aloof is so far from my personality that it’s laughable.

There is no “new” you, there’s just you.

If folks have bought this thin-life fantasy hook, line, and sinker, it makes sense to me that they’d freak out when they find out that they have a next to zero chance of losing weight permanently.

Because if you buy into this line of thinking, it doesn’t just mean that you’ll be fat (but that being fat is actually not the worst thing ever), it means that you won’t be the person that you want to be. You won’t ever have the life you want to have.

It means getting over the “inside every fat person is a thin person trying to get out” bullshit that we are sold.

As long as this fantasy thin-life person (who doesn’t exist) is looming somewhere in your consciousness “waiting to get out” you are always going to be a fat, poor, pathetic loser compared to her.

Who do you want to be and what are you going to do about it?

I ask you: Who are you really? Who do you want to be? What are you going to do about it?

There really is no “new you” waiting at the end of the thin rainbow. The promise of a different life is a false promise. Because the choices we make define our lives and what possibilities are open to us.

As we get older we start to understand that we can’t have everything. Making one choice opens up a whole world of possibility but shuts down many other choices that were previously available. As you learn that this is just life, you no longer feel like Sylvia Plath sitting in the fig tree, despairing that you can’t choose or mourning the life you can’t have.

And the good news is that if you can get over the magical thinking around being thin, the rest of self-acceptance and body image work is going to be so much easier. It takes work though to get here.

Because you have to accept that at the end of the day, fat or thin, you’re still you. With your personality, and your flaws, and your strengths and weaknesses, and the way you do the world. I know plenty of people who have lost weight and still been miserable with their bodies, with the same baggage that they had when they were fat, right there staring them in the face.

As Mara so eloquently put it,

“No one is going to ride in on a horse to save me from myself.

“No one is going to protect me from my self-destructive tendencies.

“But, in her absence, I have to tell you – I found that am beautiful.

“No, I am not saved, but without her to compare myself to – I’m not always failing.

“Without her, I was able to step out of the shadow I had created for myself.”

The process of letting go of the magical thinking around thin-life coming to rescue you is hard, but it’s worth it. Because that means you can realize who you really are, who you want to be, and start becoming it.

It means that you can quit wasting time postponing your life until you get thin, and start becoming the person you want to become. In the body you have today.

“Decide what to be and go be it.” -The Avett Brothers