Hey, it’s the 30-year old you. I know you probably don’t want to hear from me, but I have some stuff to tell you, so stop rolling your eyes and listen up.

At the end of this year, you’re going to graduate high school – right after your 16th birthday. I know it’s weird being younger than everyone else. I know you hate not being able to drive when everyone else is. You’re graduating early because you’re the smart one in your class, and although you think that’s not good for anything now (except letting the cute boys cheat off your tests), it’s going to make you a lot of money and get you a lot of respect when you’re older. Your husband will even call you Amber-pedia because there’s never a question you don’t know the answer to. And this nickname is pretty much the cutest thing ever. Your smarts are an asset, not a liability. We’ll talk more about this later.

I know it was hard moving 3 states away in the middle of your senior year of high school. It sucks being 15 years old when everyone else is 18, much less being the new girl in the senior class. And the weird chubby girl from Georgia with a southern accent who came into a tiny, extremely cliqued private school in the middle of the year. That’s what ya got, kid. Time to make it work and carry on.

I know you don’t fit in.

I know you’re listening to Garth Brooks while everyone else is listening to Metallica. I see your notebooks covered in your own drawings (they’re good!), while everyone else has photos of their friends tucked behind the clear covers on their binders. I remember it being a sort of status symbol – the people you had pictures of determined what group you ran with. Since you were new, you didn’t have photos of anyone. I know you’ve thought about putting pictures of your Georgia friends in your notebook cover, but no one knew them so you figured it would just look weirder. Don’t worry so much about it, honestly.

You should listen to the art teacher, who tells you your drawings are the best in the class. In fact, you should stop trying so hard to make the basketball team, the cheerleading squad, the volleyball team, and take some more art and photography classes instead. Listen when people compliment your work, and stop trying to make your drawings a little worse so you’ll fit in. You have a bad habit of doing that: playing dumb, playing small, acting like you aren’t as talented as you are, so you’ll fit in. Just so you know, you’re never going to fit in, and when you’re my age, it just won’t matter anyway. Not fitting in will be the best part of being older – different will be good. You’re an original. So work on your art. You’ll make a career out of that stuff someday. You’ll be your own boss, and people will be lined up to work with you. I mean, how cool is that?

Now, let’s talk about your looks. 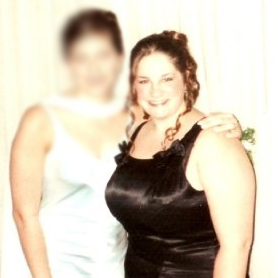 Here you are at senior prom. You’re slouching because you feel fat, but you looked great.

I know in your mind, you are horribly, terribly fat, the fattest girl in your class, in fact (and certainly the one with the biggest boobs). Let me stop you right there, girl. Your body? It is slammin’ hot. Seriously. When you are 30, 25, even 21, and you look back at that body, you will be all, “What the HECK was I doing covering that up?!” I know it was creepy when you were 12 (but looked 16) and full grown men would yell at you in the street and talk to you in the store, and you learned that if you covered up and put on some weight they’d leave you alone. I hate that you went through that. But the 30 year old you wants to tell you that girl, your body is beautiful. Don’t let anyone make you feel weird about it or that it’s wrong or sinful somehow. It’s amazing. Move it, get to know it, take care of it, glory in it. It’s the only body you have, and it’s a good one!

Let’s talk about the boobs.

I know when you hit the volleyball court during a game or have to run during practice, you hate them. I know you hate your boobs so much that sometimes you threaten to chop ’em right off. (Actually, when you’re 19, you kind of do, you get a breast reduction.) Girl, what you need is a good sports bra, and a proper bra fitting, and life will get a zillion times better. You’ll figure that out at some point, that boobs are not the enemy. And the breast reduction? Well, don’t be sad about that. Even though you aren’t fat now, you’ll be fat when you get older, and the breast reduction means you’re a pear shape, which actually looks great on you. 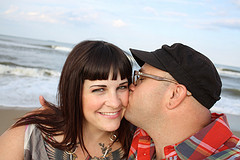 When you’re older, life gets good

I know right now you’re nervous all the time. I know you feel invisible. I know you just want someone to see you, to just know that you’re there, to say, “I hear you.” I know you hope that a boy will do that stuff for you. It will be a long time, but one day, a boy will.

You won’t even know until you’re 20 that there are boys out there who LIKE curvy girls, who prefer girls who look just like you. Let me tell you, they’re out there. You’ll meet one of those boys and you’ll fall in love and you guys will have the MOST kick-ass life.

Please, stop letting boys cheat off your tests. Stop playing dumb and giving wrong answers in class because you think boys don’t like smart girls. Stop playing small and scared. One day there will be a boy who will love you for exactly who you are, smarts and cellulite and big boobs and all. None of those boys in your school saw the real you, but this boy will and he’ll love you for it.

Let’s talk about your friends.

Honestly, your friends are pretty silly. The girls you are friends with are all on diets, and love to talk about their fat thighs, even though they aren’t fat at all. They’re not even sort of chubby like you are. You aren’t silly, so you know this. Every time they talk about being fat, and how disgusting it is, I know you panic because you are *actually* kind of fat, and if they think they (the thin ones) are disgusting, you must be the worst thing ever. You’re not. You look fine. They look fine.

I wish you’d stand up for yourself and say what you’re thinking, which is, “Y’all are gorgeous, stop being so silly, and why don’t we go take some pictures out in the woods over there, I have this cool idea that involves flags and ribbons, and weird makeup.” Bonding over diets and talking about how little you ate that day or how fat you look/feel is silly. Not that high schoolers are the only silly girls doing this. Plenty of full grown women starve themselves and stuff themselves and are nasty and mean to their bodies and bond with their girlfriends over it every day. Please, nip that shit in the bud early.

Change the subject or go do something else. Talk about art, clothes, nail polish, what you saw on the news last night, that crazy movie, the cute boy over there, speak to each other in Spanish, go take some pictures, work on that art project, go plant something, learn to cook, go for a long walk. Trust me, when you’re older, you will wish that you’d appreciated your body as it is now. 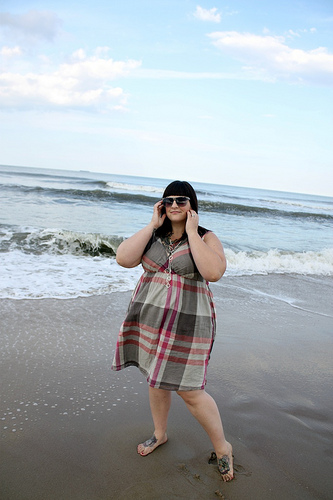 Life is going to get so good once you accept your body and move on with life. Get ready, girl.

If you want to focus on your body, focus on not hating it so much. Let it be your ally. Start lifting weights. When you’re older, you’re going to kick ASS at weightlifting, and you’re stronger even than some of the boys. I bet if you got into weightlifting in the next couple years, you could avoid a bunch of negative stuff having to do with your body and dieting and all that. Try it out. Get strong.

One day when you’re older, you’ll give up dieting altogether anyway, and decide to accept your body right where it is, decide to meet yourself halfway. I know that seems impossible right now, and I even know that you think magical stuff like, “When I’m old enough to drive I’ll be able to go to the gym and then I’ll be thin,” but that’s not really how it works. The news you might not want to hear is that you don’t ever get thin. But the good news is, you get HAPPY. I mean, ecstatic, can’t believe your luck, pretty sure you’re the only person this stoked all the time happy. You’ll love your job, you’ll inspire others to like themselves more, you’ll be known as the girl who makes connections, who makes stuff happen, the confident and cool one, the funny one. (Crazy, I know!) People will like you, but best of all, you will like you. 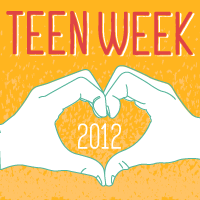 This post is part of Teen Week 2012: Words That Heal, a project the world needed that Mara at Medicinal Marzipan put together. Doodle photo credit: Flickr